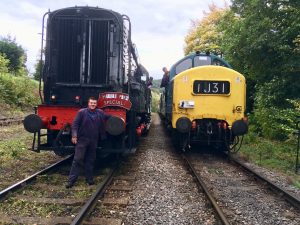 Thanks to everyone who supported our Diesel Weekend. The event was a success, with 33102 performing superbly and all timetabled trains running although with propelling moves on Saturday due to 6940 failing with vacuum problems. Our CME Mark Smales worked very hard to get her fit for the last train on Saturday – so it’s good to see that was appreciated by so many folk who waited for the last train.

6940 was in use again on Sunday, although the fault (AV2 valve and an air reservoir) reared its head again during the last train of the day, meaning the final run back from Carrog was double-headed.

The shunter workings proved fairly popular and 08195 performed faultlessly, a testament to the huge amount of work done on the loco by Tim Hines (seen in front of the loco in the photo shown above). 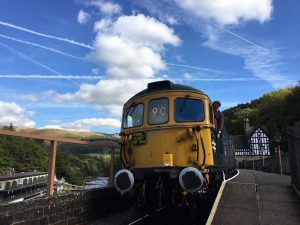 We’d like to thank the CVR and their dedicated team for loaning us 33102, which behaved impeccably all weekend.  The Channel Islands Boat Train headboard and Weymouth Tramway bell and lamp box seemed to go down well. 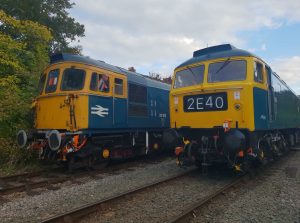 It was also brilliant to be have 1566 back in traffic. The loco performed well after extensive further work on the power unit. Many thanks to all those who have been involved with this. There was a very pleasant BR blue timewarp on Friday evening at Goods Junction during final shunting and fuelling preparations.

Here’s to next year!