The Group have enjoyed a busy and positive start to 2017, with D5310 seeing regular use and 1566 nearly ready for a “mainline” test run. 6940 will soon be de-winterised as we look forward to our main operating season starting on Sunday 7th of May. 6940 should be working this A timetable diagram (10.40, 13.00 & 15.10 from Llan and all trains working to Corwen). Planning is also well underway for our diesel gala on 23rd & 24th of September.

Fun and Frolics in February!
Our 2017 operating season has actually already begun. Following on from D5310’s successful contribution to the Winter Warmer on New Year’s Eve, the 26 has been out on public service trains twice, covering for unavailable steam locomotives. This included the prestigious, albeit very short notice, haulage of the first train of the Llangollen Railway 2017 season on Saturday February 11th, following a minor fault with GWR Prairie 2-6-2T No 5199. The Group were already engaged in a working day in the yard, so had people available to prepare and crew D5310 for the first trip of the day whilst 7822 “Foxcote Manor” was put into steam. The Manor then took over for the second and third trips. The 26 performed soundly, other than not being able to heat the train on a dull and, at times, snowy day. She is seen below at Carrog with the snowy hills in the background. 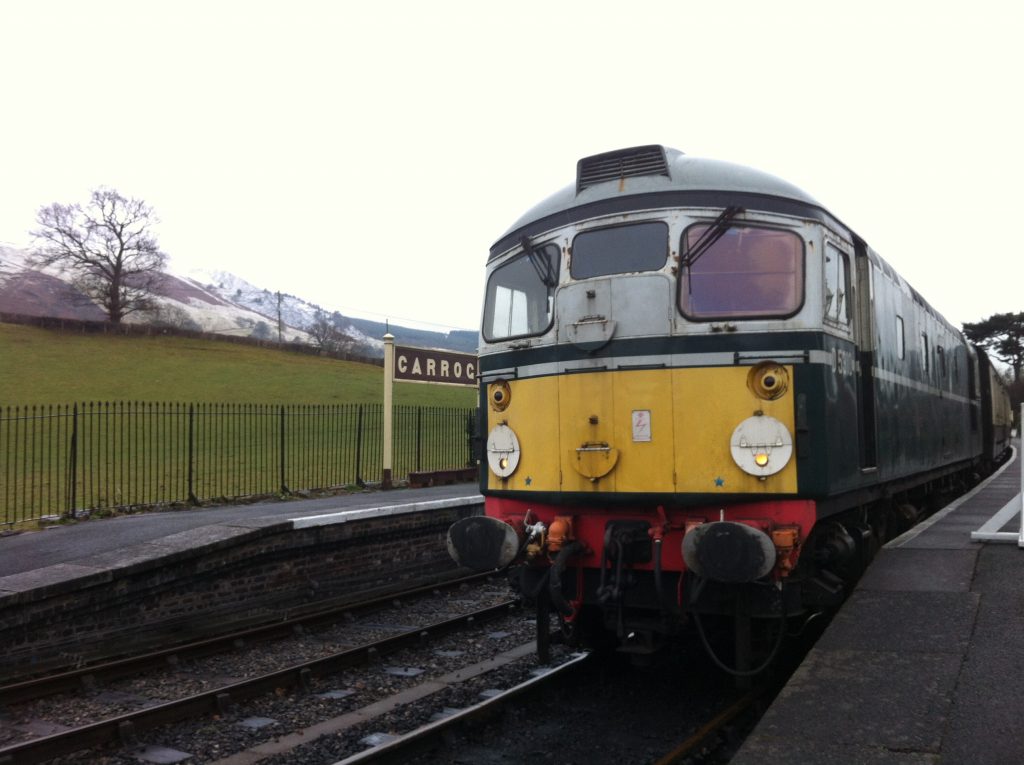 Excellent progress was also made on February 11th with getting 1566’s coolant system reassembled. The repaired top rail was refitted using the Unimog and then welded back into place by Andy Maxwell and his impressive portable welder – a petrol electric aiding a diesel electric! 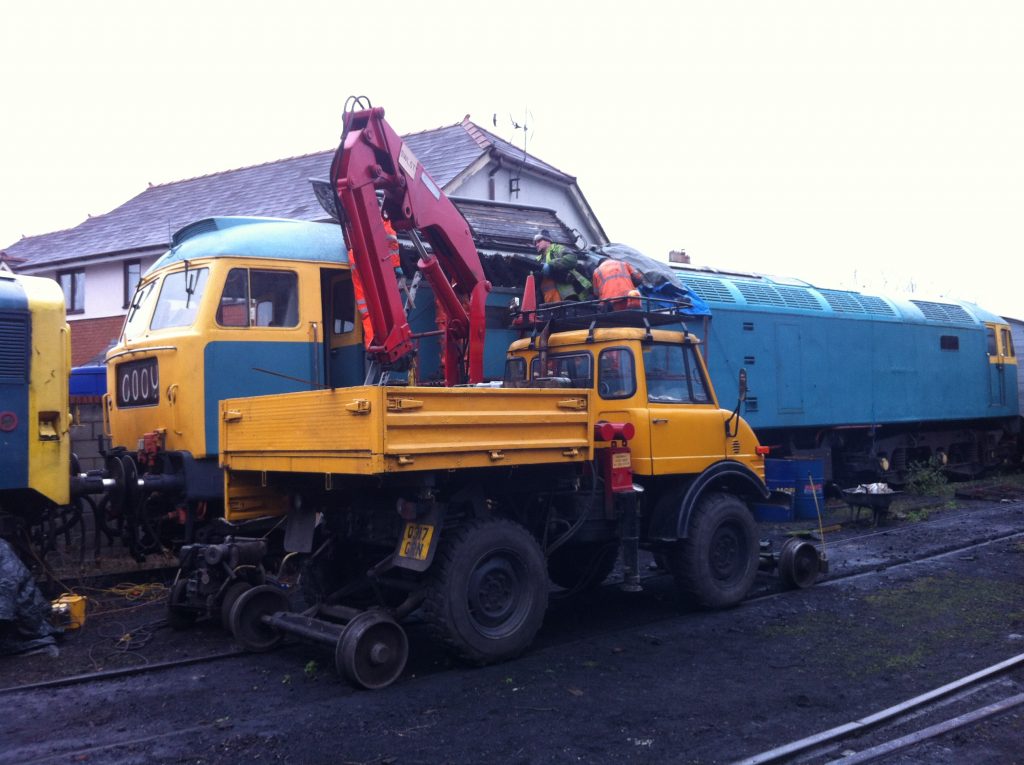 With the top rail back in place, the radiator elements were all cleaned and reinstalled. Despite cold, dark and wet conditions we managed to get them all back in (some went in easier than others as the photo shows below!). We also got the roof hatches fully reconnected to their hinges and hydraulic lines for the movable ventilation slats. 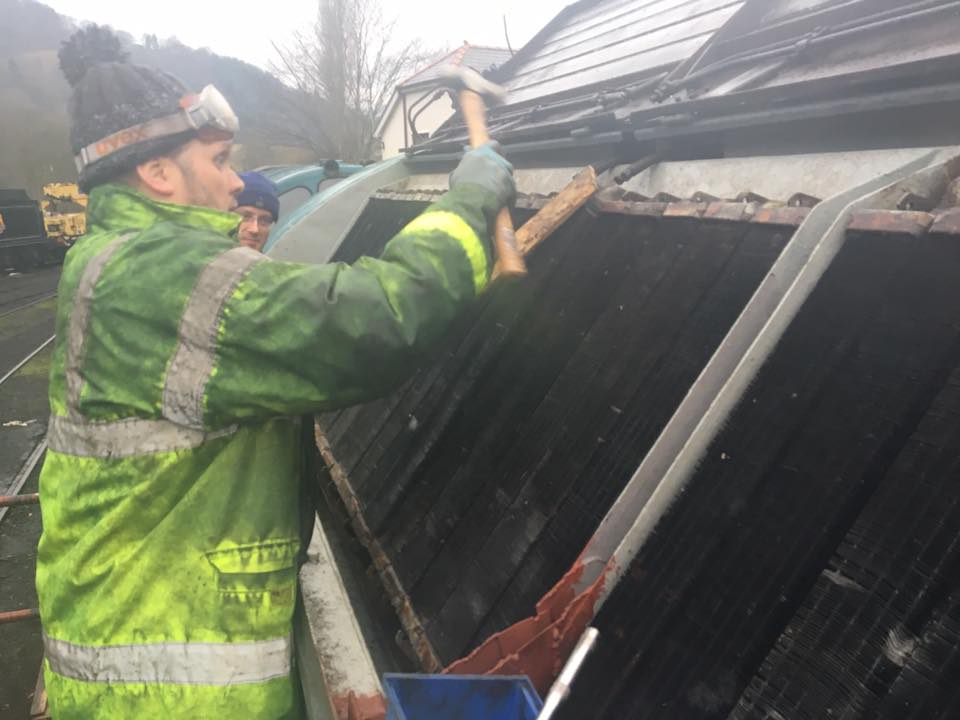 Another team were working on 6940’s No 2 end cab roof, where a long-standing but minor water leak from the roof ventilator has damaged the wood paneling. This may sound like a minor job compared to what we normally find ourselves dealing with but, in true English Electric style, has proved to be neither the quick or simple job we expected. So much for old kit being simple! Thanks to George Walker for the photo. 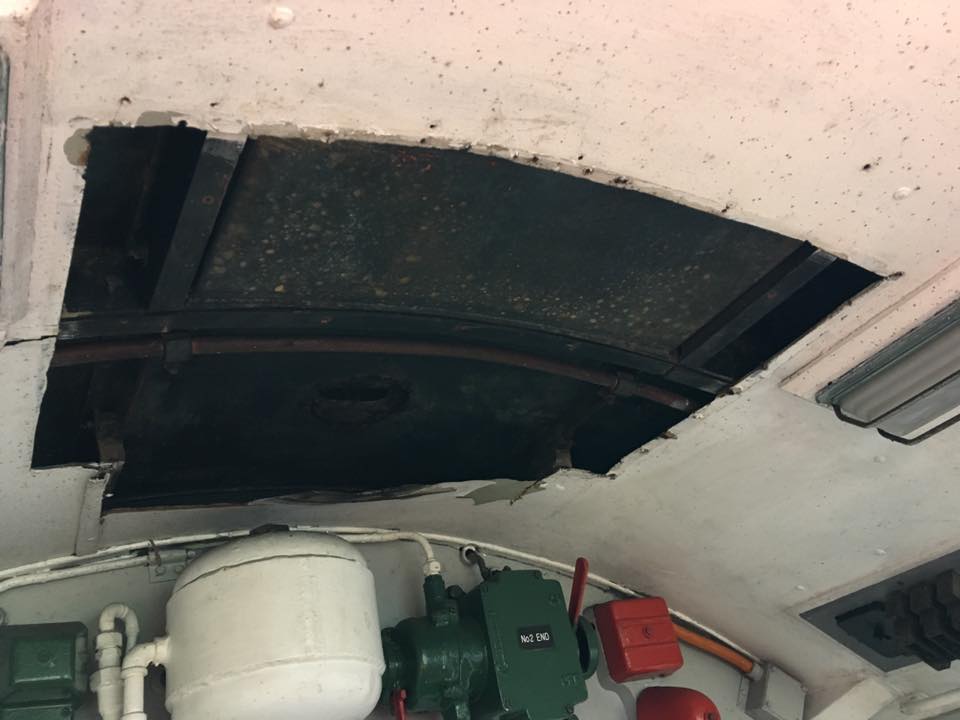 1566 Moving Again
A couple of weeks later on the 25th of February, Mark Smales filled up 1566’s coolant circuit with water, successfully started her up and then got the loco moving under her own power again. There are still some issues to sort, but this is not surprising after spending nearly 5 years out of traffic. We are now carefully working through these. An example is tracing an issue with fuel supply to a melted fuel return pipe under the engine room floor and replacing it. 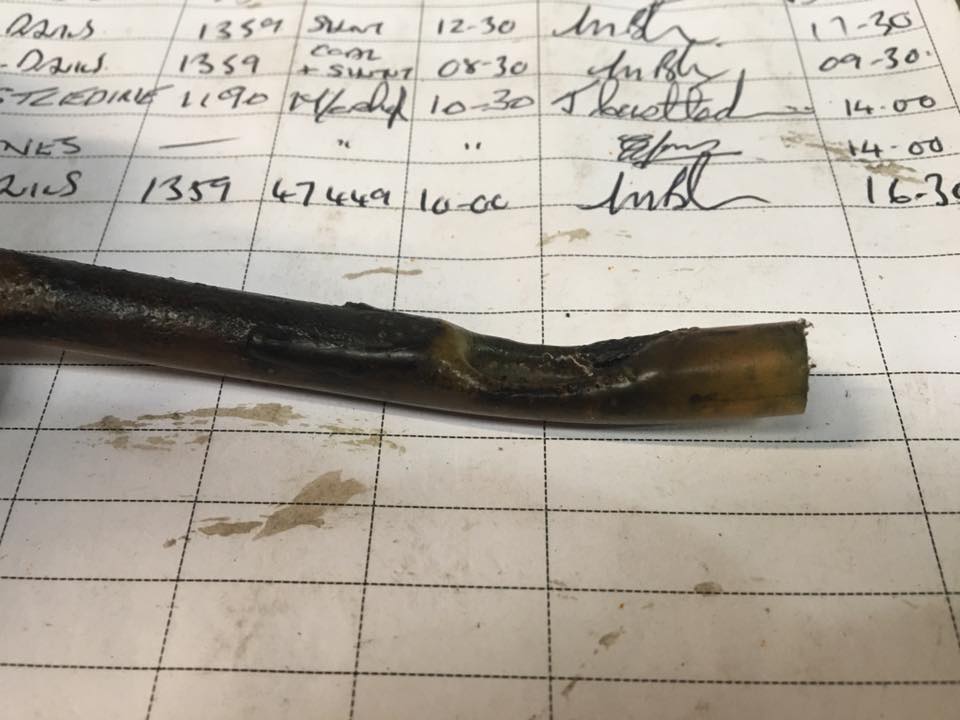 With the pipe replaced the loco undertook another successful short light engine run to Pentrefelin Goods Dock and back on the 12th of March, thanks to Matt Davies for the photo. 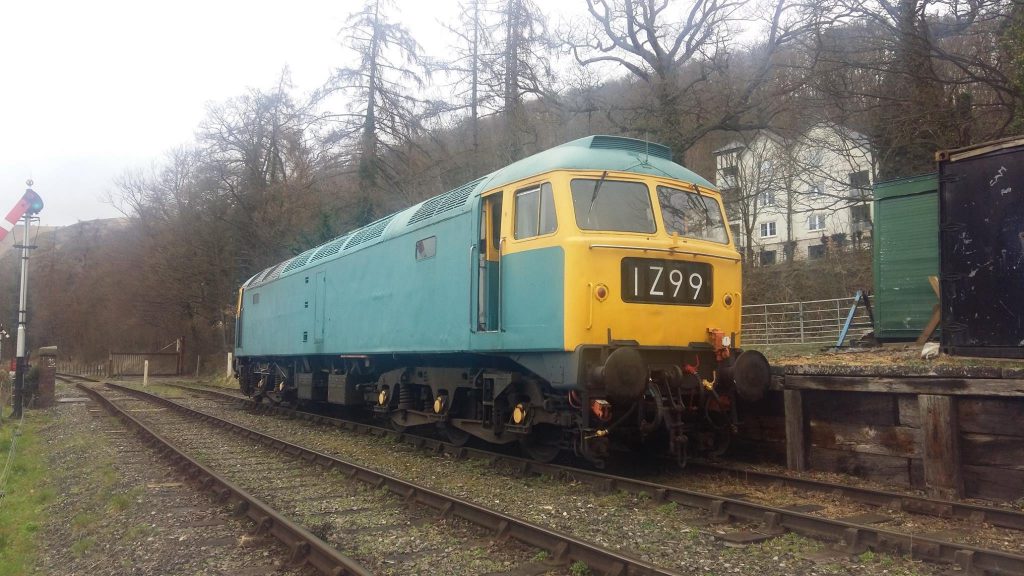 Later this spring or maybe early summer we hope to move 1566 under cover again, get the bodywork re-fettled after 18 months outside in undercoat and then apply 70’s era BR blue livery. We aren’t quite sure whether to go for pre-TOPS 1566 or post-TOPS 47449 – so wait and see. We aim to formally relaunch our largest and most powerful locomotive to traffic at our diesel gala on 23rd and 24th of September. Bring it on!

Steam Gala Intrusions
D5310 was in use again at the “Along Birkenhead Lines” steam gala, picking up the spare loco diagram on Friday 3rd March, again in place of 5199 which had been promoted to cover for Black Five 44737, which wasn’t quite ready in time for the first day of the gala after winter overhaul. She was sorted for the next day, so the gala returned to a 100% steam affair. She is seen below gently rolling into a rather dull and damp Berwyn on the 3rd of March, thanks to Mike Martin for the photo. 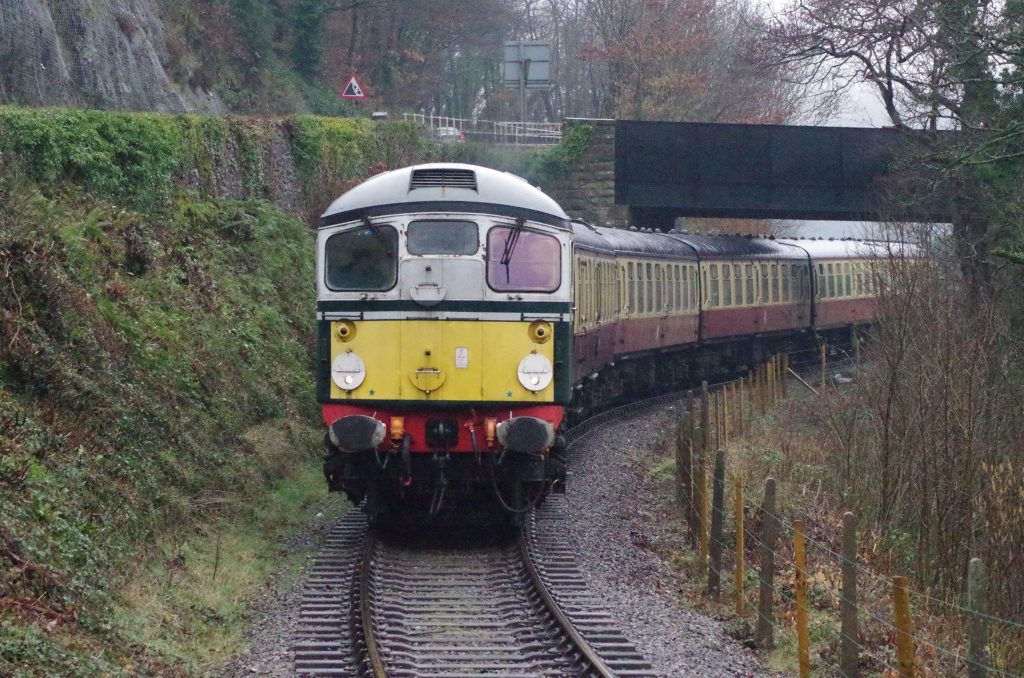 Andy Maxwell also captured this interesting shot of D5310 sat alongside 6960 “Raveningham Hall” at Carrog. The modified Hall was visiting us from the Gloucestershire and Warwickshire Railway for the gala. 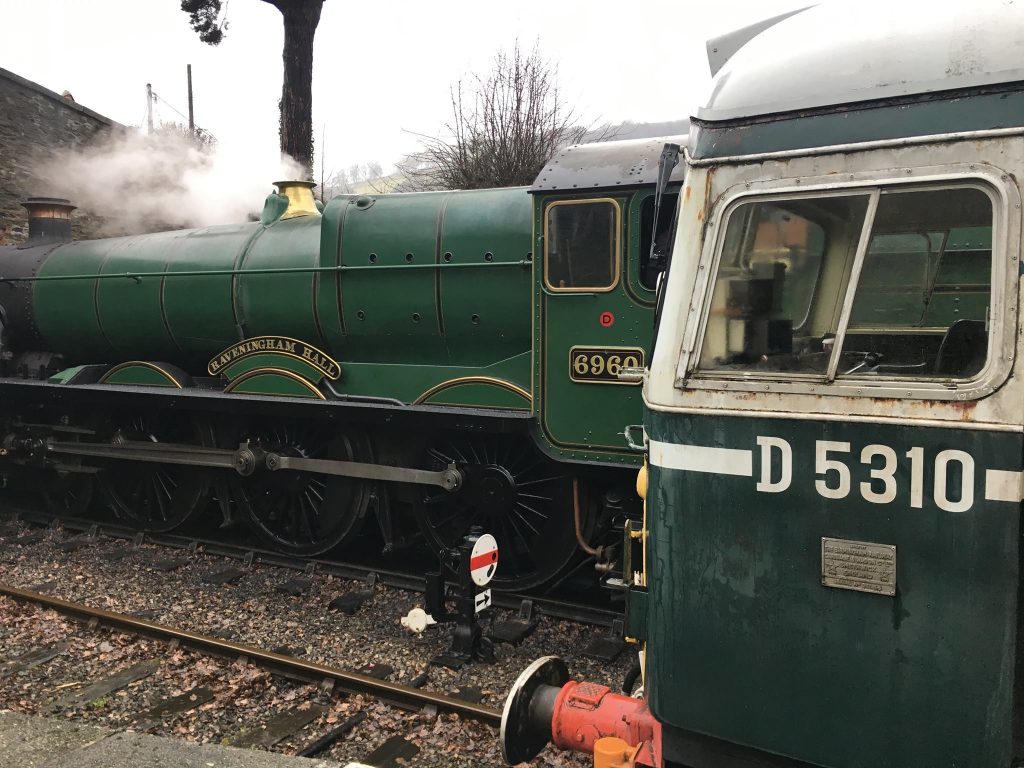 Diesel Weekend – 23rd & 24th of September
Planning is well underway for our first diesel weekend for 4 years later this year. Whilst no visiting locomotive is planned, we are hoping to make full use of the home fleet and re-launch 1566 to traffic. Plenty of operational interest should be expected, along with some authentic sights, sounds, smells and tastes from the 1970’s. Travellers Fare may be making a brief return to a Mk1 buffet and we hope to have some double headed trains, a DMU drag and an evening “Beerex”. More gen as it becomes confirmed!

In the meantime, we look forward to welcoming our supporters to our 7th May running day – see you soon for some Dee Valley thunder!