WATCH THIS SPACE FOR NEWS ABOUT OUR 27TH SEPTEMBER DIESEL DAY. ALONGSIDE D5310 AND A DMU WE HOPE TO BE ABLE TO OFFER A RARE ADDITIONAL ATTRACTION!

Along Western Lines
D5310 will continue her most intensive year of operation yet at the LR, seeing 3 days of operation at Llangollen from tomorrow to Sunday at the “Along Western Lines” gala, deputising for unavailable GWR 2-6-2T No 5199. This will include a trip or two top-and-tailed with a steam loco to Bonwm – only the second time the Type 2 has worked a public train over these metals. A full timetable is available on the LR website here:http://www.llangollen-railway.co.uk/wp-content/uploads/2014/06/Friday-timetable-29th-August.pdf

60’s Weekend – A Record Success!
A belated but massive thank you to all who supported our 1960’s weekend last month. The event continues to go from strength to strength, with a modest increase in takings but nevertheless a new revenue record. We never thought we would deliver 5 successful events.

Everyone seemed to get into the spirit of things even more than before this year. We even had a visit from the man himself in Dr Beeching’s Bar……

…….and a suitably adorned and equipped driver on D5310: 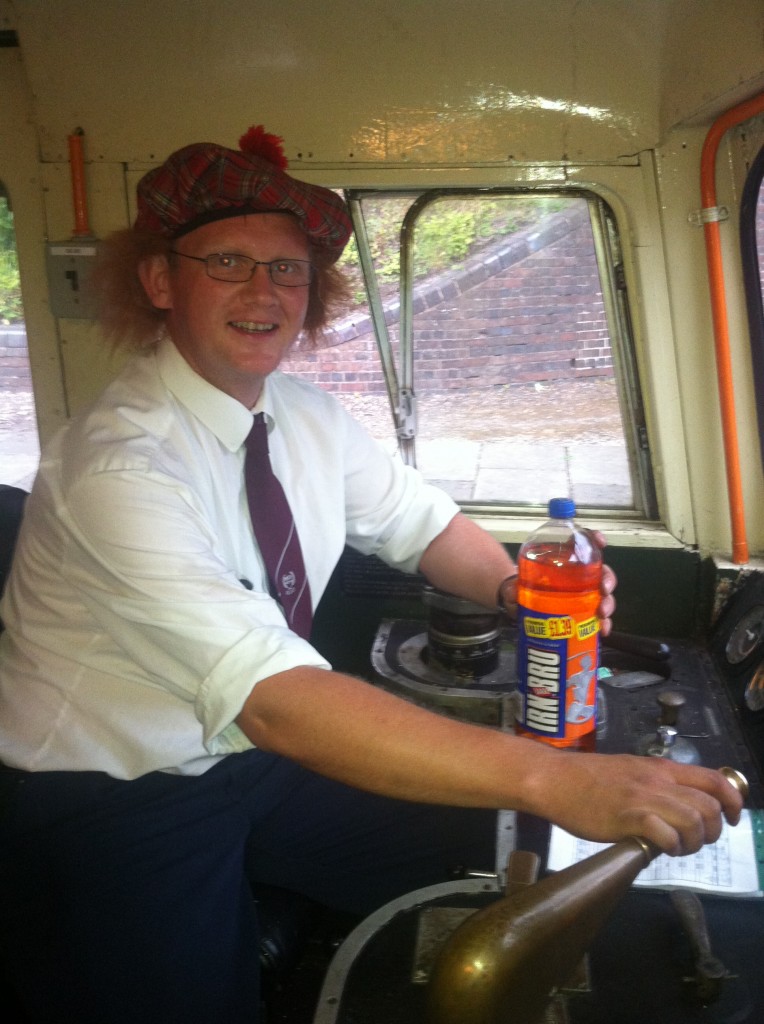 Dates for the next event are already confirmed as July 25th & 26th 2015. Get them in your diary now! Entrants for the classic car rally are welcome to confirm their attendance as soon as they wish. We now also have a regularly updated Facebook event page.

D5310 News
The loco performed well over 60’s weekend, despite suffering from an ongoing issue with the AWS brake feed cut-off valve at number 1 end that has proved difficult to sort. An overhauled valve was fitted just before the event, along with a replacement driver’s combined brake valve. Unfortunately the replacement brake valve was faulty when tested so the original was refitted very hastily on a very hot afternoon. Much colourful language aided rapid completion. The cut-off valve then decided to fail again on the Sunday afternoon, but fortunately only when the loco had arrived at Carrog on the last working of the day with the opposite end cab then needed to get back to Llangollen, which was working perfectly. A replacement cut-off valve has now been fitted and all appears well.

Investigations into persistently flat batteries between periods of use led us to discovering that little charging was taking place when the power unit was off load. After some research this was found to be due to a low idle speed, so the governor was adjusted in June to try and combat this problem. This appears to have done the trick, with no further issues experienced during starting since the adjustment.

A specialist glazier has also done a fantastic job of cutting and fitting a new droplight glass after a certain heavy-handed secondman (who shall remain nameless) managed to smash one at No 2 end in June.

6940
Many have been keen to find out what is happening with the 37 and her unfortunate bogie defect. Although no visible progress has been made we can assure 6940’s fans that we are working very hard behind the scenes to source another bogie to allow us to repair the one underneath the loco and hope to be able to provide some good news soon. The timing of a return to traffic is difficult to predict and needs to be balanced against the less difficult and probably much cheaper job or returning D1566 to traffic to return us to having two operational locomotives at our disposal.

D1566
Work on the power unit overhaul will continue over the Winter and bits and pieces of bodywork have progressed as time allows. Progress should liven up once our 2014 operational commitments have concluded.