SPRING DIESEL DAY AND A VISITOR!

Our Spring Diesel Day will take place on Saturday 26th March and will see the first diesel operation of the year at the Llangollen Railway. More details will follow in due course, including timetables. Resident locos Class 26 No D5310 and Class 37 D6940 are expected to take part, along with one of the Llangollen Railcar Group’s DMUs.

The Llangollen Diesel Group are delighted to announce a visiting loco for 2011 which is planned to debut at the Spring Diesel Day. A1A‘s Class 31 No 5580 (31162) will be joining us for a 21 month visit until the end of 2012. The locomotive will undergo a B Exam this weekend to confirm fitness to take part at the Spring event. All being well, the recent severe weather has been kind to the 1960-built machine during winter storage at Elsecar.

The lengthier visit of our guest locomotive will help offset transport costs and ensure plenty of enthusiasts can sample a Class 31 working on the Llangollen Railway for the first time. 5580 will also be used on some of our regular 4 trip mileage accumulation days, the 1960’s weekend on 30th and 31st of July, the new Bus Rally on 27th & 28th of August and our Autumn Diesel Day on 24th September.

The locomotive will also be available for driver experiences, private and photo charters, the latter of which we hope will be popular seeing as 5580 is in early BR blue livery and matches our resident Class 37 6940 perfectly.

Further news about the visit of the loco will appear on our website in due course. 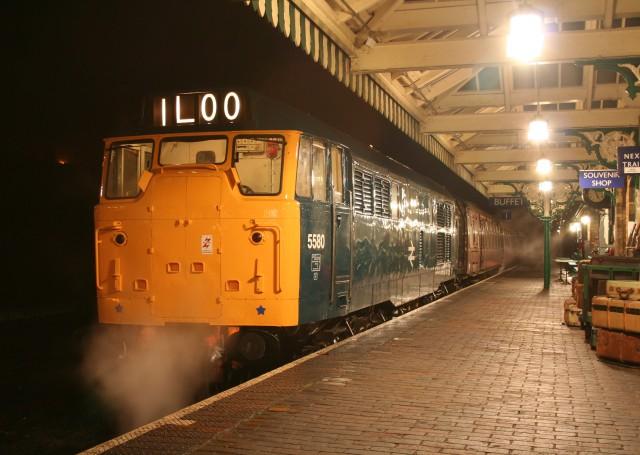 5580 is seen in November 2007 at Sheringham during her spell on the North Norfolk Railway. The train heating boiler is currently out of ticket, with A1A considering the possibility of overhaul when funds allow. Photo courtesy of Mark Atmore

This entry was posted in Diesel Group, Llangollen Railway, Uncategorized. Bookmark the permalink.